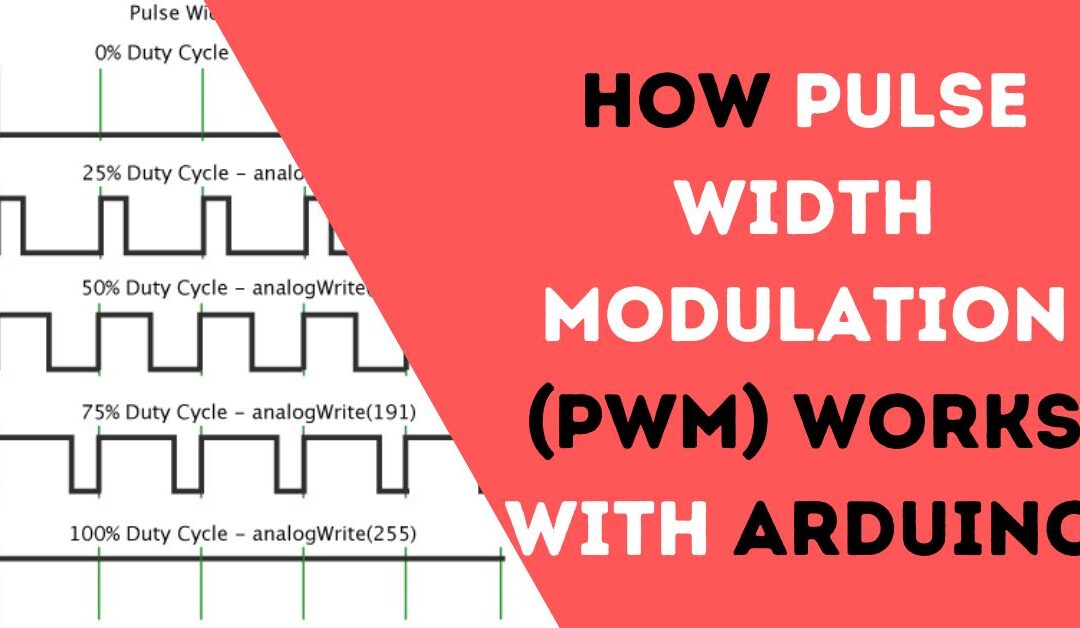 Pulse Width Modulation(PWM) is a technique used for getting analog signals with the help of digital means. The digital control is used to create a square wave, a signal switched between an on and off state.

The behavior of Pulse Width Modulation is determined by the duty cycle and frequency of a PWM signal. The duration of “on time” is called the pulse width. To get varying analog values, we have to change or modulate, the pulse width.

Note :- The frequency of PWM in arduino is about 500Hz.

The digital input/output pins of Arduino resides in two states:-

Tc = It is the total duration of the signal as the sum of HIGH and LOW.

The duty cycle of the Pulse Width Modulation signal refers to the ratio of the time that the signal is in a high(on) state divided by the total time it takes to complete one cycle.

A low-duty cycle corresponds to low power as the power was off for most of the time.

Generally, the duty cycle is expressed in percentages as follows:-

To understand the function of PWM in Arduino boards let’s take an example:-

Suppose we want a LED to blow/high for a certain amount of time, so the duration to which the LED will be high depends upon the duty cycle and frequency.

The frequency of a signal determines how fast the PWM completes a revolution or cycle (i.e. 1000 Hz would be 1000 cycles or revolutions per second) which means how fast it switches between ON (high) and OFF (low) states. By repeating this ON-OFF pattern at a fast-enough rate, and with a certain duty cycle, the output will appear to behave like a constant voltage analog signal when providing power to devices.

The Analog write function is used to write a PWM value to a pin. Analog Write functions can help us to light LEDs with varying brightness.

When an Analog Write function is called a stable rectangular wave of a particular duty cycle is generated by the specified PWM pin until the next analogWrite() is called on that same pin.

Difference Between AnalogWrite() and AnalogRead():-

The difference between AnalogWrite() and AnalogRead() function is as follows:-

For the PWM pin, we will now specify the value instead of High or Low.

Now let’s check the code to control the brightness of the LED.

Here we have connected the PWM with pin 6.

The Pulse Width Modulation pins are available on every Arduino board.

The Arduino IDE has a built-in function analogWrite(pin, value) which can be used to generate a PWM signal for a given pin:-

With the help of these above-mentioned functions we can provide any value in [0-255] range which maps to [0-100] duty cycle in percent.

The Code for generating a 490 Hz and 50% duty cycle signal on PWM pin D6 is written below:-

How to Calculate The PWM of Arduino

The analogWrite() function discussed before is used to generate a PWM signal in Arduino.

The value associated with the analog signal is from 0 to 255. It means 256 levels of values.

The maximum voltage read by the Arduino is 5V.

We can determine the output PWM voltage by using the formula mentioned below:-

The number of PWM pins depends upon the Arduino board variant. For example, Arduino UNO, and Nano have 6 PWM pins while Arduino Leonardo and Micro have 7 PWM pins.

PWM is used in communications to power control and conversion. For example, PWM is commonly used to control the speed of electric motors and the brightness of lights, etc.

The PWM has up to 4 channels.

PWM is a way to control analog devices with a digital output.

Yes, PWM pins can be used effectively with battery or DC power-driven applications.