Arduino Micro pinout and their function 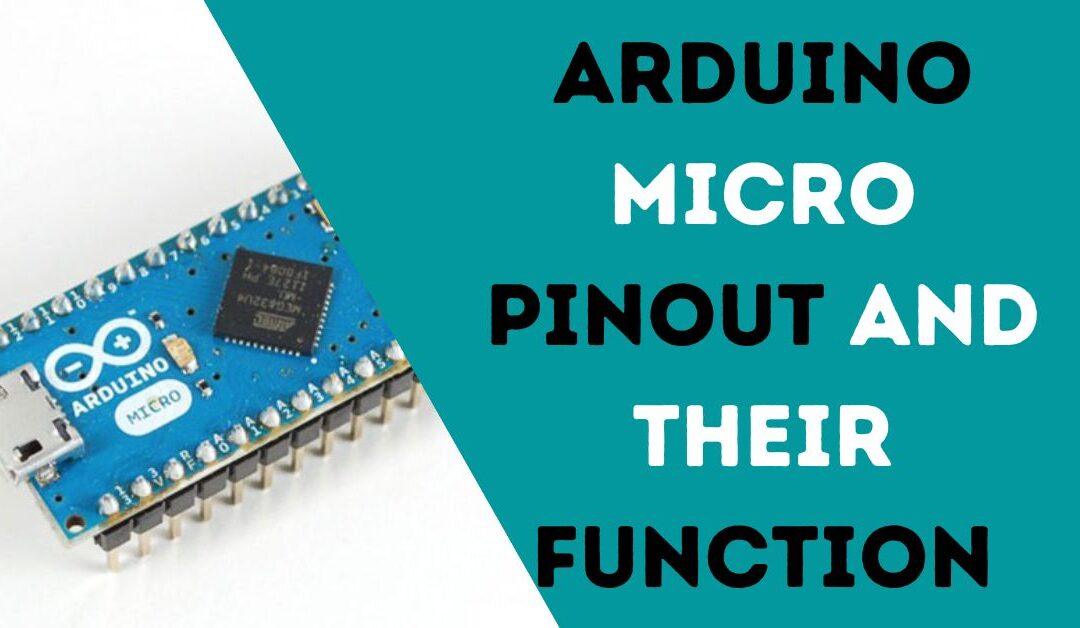 The Arduino Micro is a smaller version of the Arduino Leonardo board. Like Arduino Leonardo, it also has an ATmega32U4 microcontroller And consists of digital input/output pins, a micro-USB port, a crystal oscillator, an ICSP header pin, a RESET button, etc.

It contains everything needed to support the microcontroller, we just only need to connect it to a pc through a USB cable and we are ready to go.

The Arduino Micro contains a Crystal oscillator having a frequency of 16MHz. It generates the clock signal in the microcontroller.

The Crystal oscillator is used to provide the basic timing and control to the board.

The Arduino Micro comes with a Micro USB 2.0 port which allows us to establish the connection between the board and the computer. It is very important in programming the Arduino Micro board.

In Arduino Micro, a built-in LED which is green in color is connected to the digital pin 13. This LED can be controlled by switching the pin to High and Low.

In the Arduino Micro board, there is an RX LED connected to digital pin 17 which shows the receiving of data. This LED can be controlled by switching the pin to high or Low.

In the board, there is a TX LED which is connected to the digital pin 30 which represents the transmission of data. This LED can also be controlled by switching the pin to high or low.

The Specifications of Arduino Micro are listed below

When a certain voltage(5 volts) is given via the power jack to power the board, this voltage shows up at the Vin pin. The Vin pin and Power jack terminal are connected to each other internally.

The 3.3v Pin of the Arduino Micro board is used to generate an output voltage of 3.3v.

The Arduino Micro board contains 20 digital input/Output pins which are used as an Input or Output. The Digital I/O pins operate at 5 volts of voltage. The digital pins of Arduino Micro are able to read one of the two states which are ”High” when the electric signal is present and ”Low” when the electric signal is absent. This kind of input is usually known as digital or binary and these states are referred to as HIGH or 1 and LOW or 0.

The Arduino Micro board consists of 12 analog input Pins, which are labeled as ADCX where X represents the Pin number.

Every pin of the Arduino Micro board is connected to an inbuilt ADC of 210 bit(210  bit = 1024 different values) resolution.

The Pulse width Modulation(PMW) Pins are used to convert the digital signals into analog signals.

7 Pins from the digital pins are PWM Pins, they are numbered as:-

Each PWM Pin provides 8-bit output. In order to generate the PWM output we have to use a syntax “analogwrite(PWM Pin, PWM value)”. PWM values vary between 0 volts to 255 volts.

SPI Pins of Arduino Micro Board

SPI stands for “Serial Peripheral interface”. These pins are used by the microcontroller to communicate with other peripheral devices. The communications are supported by the SPI pins which are present on the ICSP header using the SPI library.

The I2C stands for “Inter-Integrated Circuit”. I2C is a two-wire serial communication protocol. It uses two pins for sending and receiving the data, a serial clock(SCA) pin and a serial data (SDA) pin.

It stands for Serial Clock. It is defined as the pin that transmits the clock data between the devices. It is used for synchronization purposes. The Serial Clock is provided by the master device.

It stands for Serial Data. This pin is used by both the slave and master device to send and receive the data in between. This is the reason why it is also called a data line, while SCL can be called a clock line.

ICSP Pins of Arduino Micro Board

ICSP stands for “In-Circuit Serial Programming”. The header pins of ICSP are used to program the firmware of the Arduino Micro Board. The important firmware updates with new capabilities are sent in through the microcontroller with the help of the ICSP header. The ICSP header consists of 6 pins.

The interrupt pins can be configured to trigger the interrupt if any of the following changes occur:

This pin is used for the reference voltage for the analog inputs. AREF pin is used with the function analogReference().

For Resetting the board a low or 0 is given to this pin.