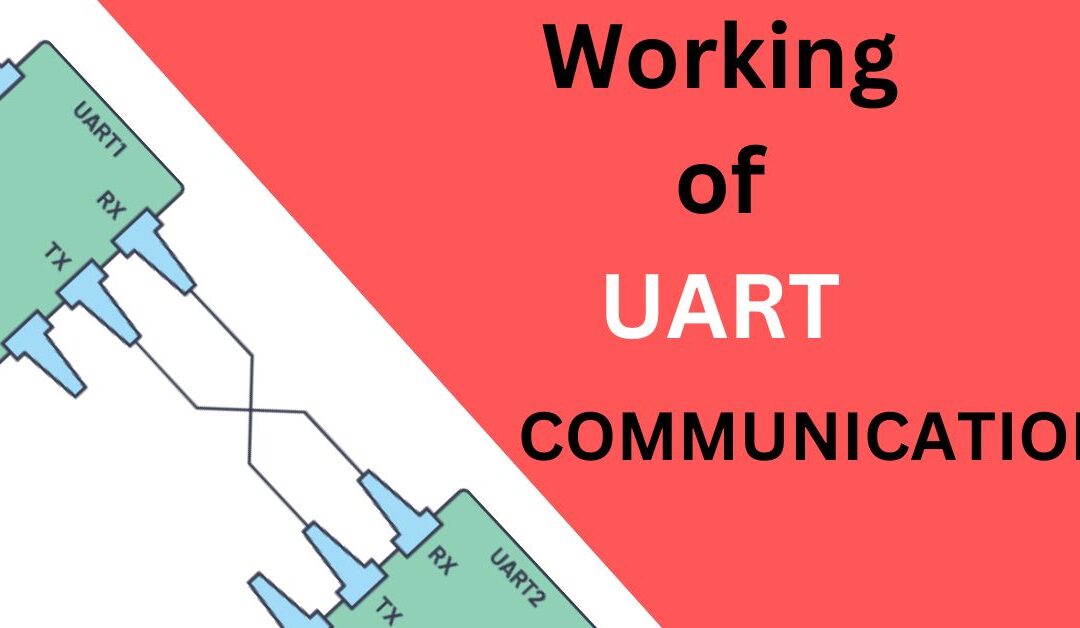 UART is an acronym for Universal Asynchronous Receiver/Transmitter. UART is one of the most used device to device communication protocols. In UART the data format and communication speed are configurable. UART supports asynchronous serial communication.

Serial UART is the serial communication protocol used by Arduino to communicate with other devices. It is a method of sending data in which the data is sent bit by bit.

The UART has some settings that are needed to be the same on both devices to establish proper communication between them. These UART settings are the baud rate, data length, parity bit, number of stop bits, and flow control.

The rate of data transfer in serial data communication protocol is calculated in bps (bits per second). A widely used terminology for bps is the baud rate,  which means a number of changes in signal per second. Here in the serial UART communication signals are in bits, therefore bit rate = baud rate.

Data length refers to the number of bits per byte of data.

The parity bit is the bit that is added to the transmitted data that tells the receiver if the number of 1s in the data transmitted is odd or even.

The UART devices can use none, one or two-stop bits which are used to mark the end of a set of bits often called packets transmitted.

Flow Control is the method that is used to avoid the risk of losing data while transmitting the data over UART.

The UART device uses special characters as flow control to start/stop transmission if it recognizes any data loss.

A serial bus with two terminals is used for UART communication which is TX (D1) and RX(Do).

We have to keep in mind that UART are specific for devices. It means that if we want to establish serial communication using UART between two Arduino boards(A and B).

This function is used for initiating serial communication with the baud rate.

This function is used to send the ASCII character on the serial port followed by a carriage return.

This function is used to write binary data to the serial port so that it returns the number of bytes written.

This function is used to return the number of bytes available to read.

This function is used to read the received data serially.

This function is used to read the received string.

When the computer sends data to the Arduino, this process is done through USB.

Once the data is transferred this USB signal is then converted into serial form and transmitted to the UART. The received data is then placed in a buffer, which is a memory storage used to hold the data temporarily.

Only three wires are required for serial communication and they are:

In UART serial communication, both devices can send and receive data at the same time, which means it is capable of full-duplex communication.

As its name suggests, UART transmits data asynchronously, which means there is no external clock line driving the bits.

The start bit indicates the start of a data word and is used to synchronize the transmitter and receiver. This is always 0.

The stop bit indicates when the last data bit has been sent. Modern devices use a 1 stop bit.

The data packet, usually 5 to 9 bits in length, is the information to be transferred. This information is in the form of binary data bits.

The parity bit is used for error detection via a simple error-checking algorithm that is now rarely used.

The code for transmitting data serially to the computer using Arduino is as follows:-

The code for reading data serially from the pc and displaying it on a serial monitor is as follows:-

In this, the master Arduino will continuously send or transmit a string of data to the slave Arduino.

Code for Reading transmitted String from PC using Arduino is as follows:-

Program for on and off of LED:-

Advantages And Disadvantages Of Using UART in Arduino:-

The advantages of using UART in Arduino are as follows:-

The disadvantages of using UART in Arduino are as follows:-

The UART interface does not need a clock signal to synchronize the transmitter and receiver devices because it transmits data asynchronously.

The UART can be configured for Full Duplex, Half Duplex, RX-only or TX-only versions

The universal in name of UART refers to the configurability of both the data format and the speeds at which it is transmitted/received.

The first UART was invented by Gordon Bell of DEC.