How to Code Arduino Blink Code Without Setup() and Loop() Functions 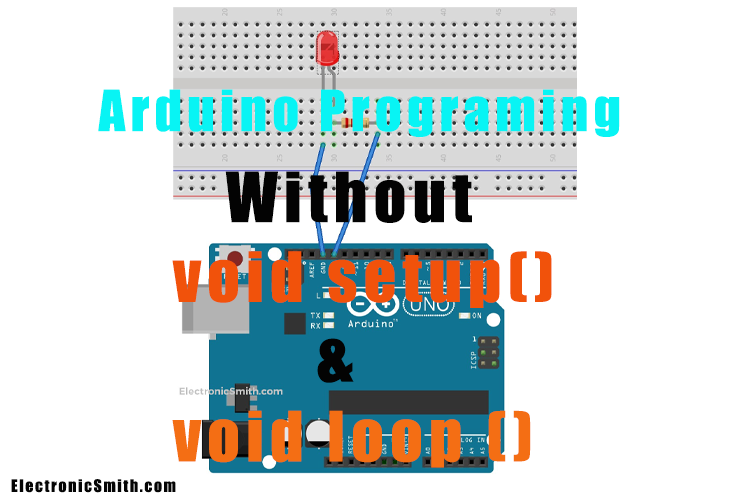 Setup and Loop are the two main pre-define functions of Arduino but they occupy a lot of memory. A simple blink code occupies 925 bytes of memory. The question is how to code Arduino without these functions and save memory. Also, is it possible to do so?

This is a part of the Arduino code basics. The connection is very easy for Arduino blink, connect everything as shown in the diagram below.

This is the Arduino blink program which toggles a led between HIGH and LOW with a delay of 1 second. Arduino code language is C++ and there are predefined functions to make it easier for coding.

How to Write Arduino Code Without Setup and Loop Explanation

This Arduino code works fine as it successfully toggles the pin between high and low.

There is a PIN method that allows toggling the pin state depending on the preview state. So, I use the method which makes my code shorter and less in size.

PORTC maps to Arduino analog pins 0 to 5. Pins 6 & 7 are only accessible on the Arduino Mini.

Each bit in these register corresponds to a single pin. Such as DDRB, PORTB, and PINB refers to the low bit pin PB0 (digital pin 8). For a complete mapping of the Arduino pin number to ports and bits, see the diagram for your chip i.e. ATmega8, ATmega168. (Note that some bits of a port can be used for things other than I/O, be careful and do not change the values ​​of register bits corresponding to them.)