Arduino vs Raspberry Pi comparison to choose the right board 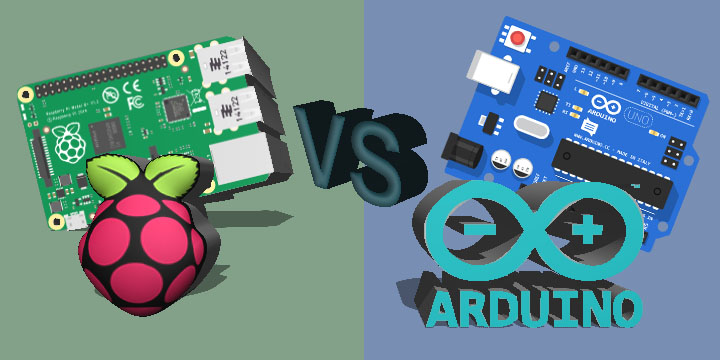 It is really difficult to choose the right board to start learning. Arduino vs Raspberry Pi for robotics, which do you think is best. There are many questions related to this topic. In this write-up, we will discuss these two popular boards in detail.

What is Raspberry Pi vs Arduino

Raspberry Pi is the name of the single-board computer. You can plug a computer monitor and can use it as a normal computer by attaching a keyboard and a mouse. This mini-computer is designed by the Raspberry Pi Foundation, UK.

When we hear the word Arduino, the first question that comes to our mind is what is it about. So, an Arduino is an open-source electronics platform based hardware and software. Arduino is easy to use as a microcontroller. Actually, Arduino is the name of the company that has products like Arduino UNO, Arduino mega, Arduino lily, etc.

There are lots of variants available in the market according to the application. But here, we will compare Raspberry Pi 3b+ and Arduino UNO. I choose these two boards as they are very popular amongst all of the other variants.

Arduino UNO is an ATmega328P microprocessor based development board. It has 14 digital and 6 analog input-output pins. It supports UART, SPI, I2C protocols. Arduino UNO has onboard USB to TTL, and by using this you can program your board directly through your computer.

Raspberry Pi is a single-board computer. And you need an operating system stored in an SD card to use it. It has 17 GPIO(General-Purpose Input-Output), 2 pins for I2C, 2 pins for UART, and 5 pins for SPI communication. Raspberry Pi b3+ has 4 USB Port, 1 HDMI port, 1 camera port, 1 ethernet port, and one display port. The board also has an inbuilt Wi-Fi, Bluetooth, and one audio jack.

Arduino UNO has 32KB of flash memory, 2KB SRAM, 1KB of EEPROM. It also has 16 MHz CPU speed. If you want a detailed comparison of all models of Arduino, click on this link.

Arduino can be directly programmed using Arduino IDE which is an open-source software. Using this software, you can program any Arduino directly using any laptop or PC. Here is a tutorial on Arduino Software download and installation in 2 simple steps. Arduino support C++ language.

Raspberry Pi is a tiny computer with GPIO. So you need an OS., and after that, you need a screen, keyboard, and a mouse to work with it. Raspberry Pi supports python, so you need to have hands-on experience in this language to observe the output.

Price is one of the most important factors while choosing the hardware. If you’re willing to go for the original product, it will cost $23 for Arduino UNO R3 or if you want a clone it will cost around $7 approximately. On the other hand, Raspberry Pi 3B+ costs $35 on an average.

I prefer Raspberry Pi but only if you know what you are doing, then go for it. But If you are a beginner, it is suggestible to go for Arduino because it is very easy to use. When you are enough confident with Arduino then switch to Raspberry Pi. Raspberry Pi is so limitless that you can do anything from LED blinking to artificial intelligence.